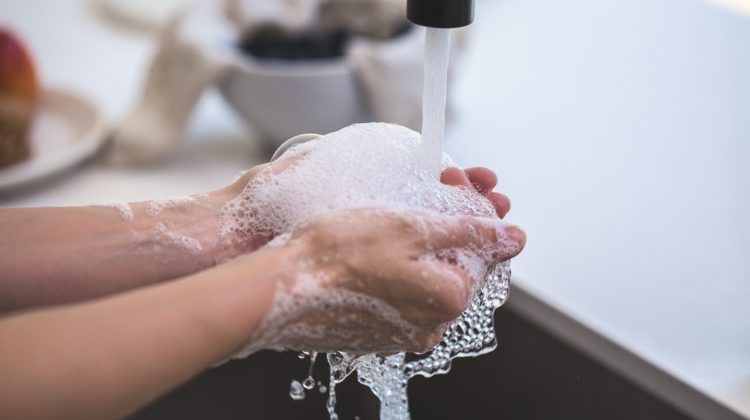 These laboratory-produced compounds are part of a long list of ingredients found in modern liquid soaps, which are actually detergents. Aside from their cleansing properties, these soaps (modern liquid soap) have been engineered for stability because they’re often shipped thousands of miles to market and suffer from exposure to heat, cold, and light. Before the days of international commerce and mass marketing, liquid soap was soap, often consisting of little else besides coconut oil and potassium hydroxide.

Coconut oil forms the backbone of most liquid soap formulations. Why? Because of lauric acid, the predominant fatty acid in coconut oil. Lauric acid possesses one supreme virtue: solubility.

The more soluble the fatty acid, the less potential for cloudiness in the finished soap. Solubility also means that the soap has a quick, voluminous lather. This property is particularly important for liquid soaps because dilution by water reduces the soap’s foaming action. The minerals contained in hard water also reduce lather, making coconut oil soaps the best performers in unsoftened water.

Because coconut oil-based liquid soaps are so soluble, higher proportions of soap to water are possible before the soap begins to congeal. A 100 percent coconut oil soap is still fluid at 40 percent soap to 60 percent water, whereas an olive oil soap begins to congeal at a much lower concentration: around 20 percent soap to 80 percent water. This is one reason why most public soap dispensers are filled with coconut-based liquid soap: This won’t block the dispenser.

However, one drawback of coconut oil is the drying effect of lauric acid. This negative property can be overcome by blending coconut oil with soft oils, such as olive, canola, or safflower oil. Palm kernel oil can be substituted for coconut oil because it has a similar fatty acid profile, but it requires approximately 20 percent less caustic than coconut oil for neutralization (Please, let me know in the comment section if this is not clear).

Palm oil and tallow possess characteristics that make them ideal bases for opaque hand soaps. They form rich, stable lathers and create a hard, long-lasting bar. These qualities are derived from the palmitic and stearic acids that constitute the bulk of both oils. But palmitic and stearic acids are mostly unwelcome in liquid soaps, where crystal clarity is desired. The two acids react with potassium hydroxide to form insoluble soaps, and these insoluble clouds an otherwise clear liquid. Which is why Palm Oil is not best for liquid soap; used sparingly, however, palm oil or tallow gives extra body to liquid soap.

Extracted from the roasted seeds of the cacao plant, cocoa butter is an excellent emollient and skin softener. Like palm oil and tallow, however, cocoa butter contains a high percentage of palmitic and stearic acids and should be used judiciously in liquid soap formulations.

For liquid soap formulation, the choice of soft oils is up to the soapmaker because all soft oils (except castor oil) require a similar amount of alkali for neutralization. Aside from affordability and accessibility, these choices are in part aesthetic: How deeply colored is the oil? How strong is its odor? Dark oils, such as soybean oil, impart a markedly amber tone to liquid soap; strongly scented oils, such as sesame oil, can alter the fragrance of the finished soap.

Another consideration in the choice of oils is stability, or shelf life. Soft oils are unsaturated and therefore combine more readily with oxygen than saturated fats, such as coconut oil or tallow. Oxidation leads to rancidity. In general, oils high in linolenic acid are the least stable and most prone to rancidity.

But this is a bit simplistic because many other factors influence the stability of a given oil, such as processing conditions, type of container, temperature of storage, and presence of natural antioxidants. It is safe to say that if you start with recently purchased oils that smell clean when opened, your finished soap should enjoy a long shelf life.

Waxes are chemically similar to oils except that the wax molecules are composed of more alcohol than glycerol. Small additions of a wax to liquid soaps enhance the moisturizing properties of the lather.

Lanolin, produced from the oil glands of sheep, is a water-absorbent base material and consequently an effective moisturizer. Because lanolin contains a high percentage of substances that do not saponify, it clouds liquid soap and should be limited to 1 to 2 percent of any formulation.

Jojoba, is a liquid wax derived from the seeds of a desert shrub. Mexicans and Native Americans have long used the oil as a hair conditioner and skin moisturizer. Like lanolin, it contains substances that do not saponify, and it must be used sparingly if crystal-clear soaps are desired.

EarnBase is a subsidiary of AFRICHANT SOLUTIONS; an Entrepreneurial and Skill Acquisition Blog with exclusive information, training, interviews, and news on entrepreneurship. We understood that starting and growing a business in a developing country like ours is not an easy deal. That is why we have decided to provide you all the necessary … END_OF_DOCUMENT_TOKEN_TO_BE_REPLACED