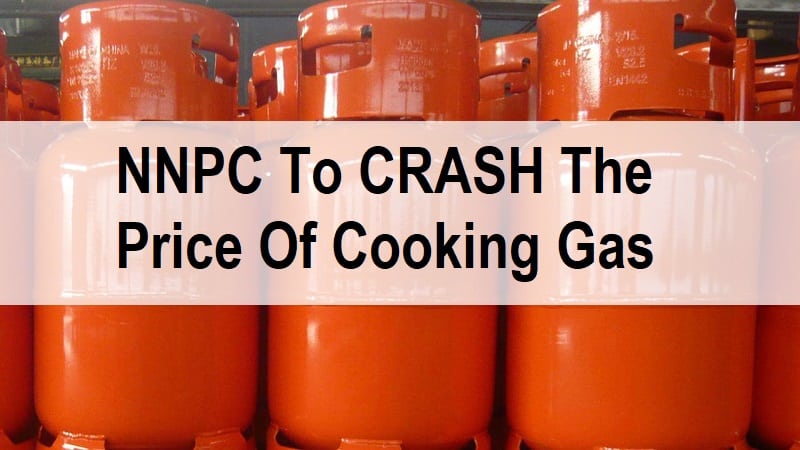 NNPC to crash cooking gas price; this is going to be a step forward in the right direction if not politicized. This simply means that cooking gas will be affordable to an average Nigeria.

The Nigerian National Petroleum Corporation on Thursday announced its readiness to implement an effective commercial framework that would halt the export of propane and butane, which are major components in the production of Liquefied Petroleum Gas, also known as cooking gas.

NNPC’s Group General Manager, Group Public Affairs Division, Ndu Ughamadu, said the move to stop the export of propane and butane which is anchored by the Crude Oil Marketing Division of the corporation would enable the oil firm to boost the supply of LPG to the domestic market, thereby leading to a natural downward slide in the price of the product across the country.

The NNPC spokesperson quoted the Group General Manager, COMD of the corporation, Mele Kyari, in a statement issued in Abuja as saying, “Currently some of our butane and propane entitlements are exported largely due to a lack of vessels to make sure that these things come into the domestic markets and the absence of a commercial framework.

“What we are going to do is to make sure we put the right commercial framework in place so that those exports are converted into domestic consumption.”

Kyari said the division was working in concert with stakeholders to create an environment for in-country production of LPG and cessation of export of the country’s equity butane and propane entitlements due to the absence of in-country vessels for transport and other considerations.

He said the goal of the division in 2019 was to complete the automation process in the marketing and sale of Nigerian crude oil grades which teed-off in 2017, noting that all hands must be on deck to achieve 100 per cent end-to-end conclusion of the process.

EarnBase is a subsidiary of AFRICHANT SOLUTIONS; an Entrepreneurial and Skill Acquisition Blog with exclusive information, training, interviews, and news on entrepreneurship. We understood that starting and growing a business in a developing country like ours is not an easy deal. That is why we have decided to provide you all the necessary … END_OF_DOCUMENT_TOKEN_TO_BE_REPLACED