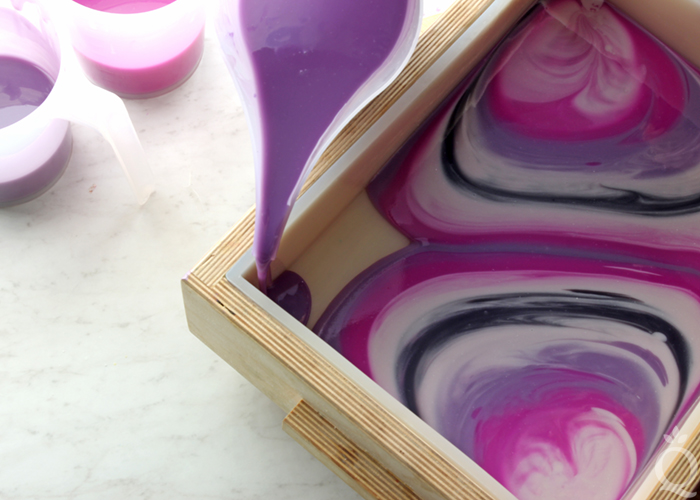 Colorants are one of the most common ways that unnatural and toxic ingredients are added to homemade soaps. Even though certain colorings are approved for use in foods and cosmetics in the United States, many countries have limited, if not outright banned, the same ones because of studies showing the damaging effects they can have on the nervous system and brain. Some unnatural colorants can be easy to miss. For example, mica is natural, but most powdered micas found online have pigments added to them so that they are much brighter than they are naturally.

I’ve found clays to stay true to initial color, making them easy and fun to use. Use clays like bentonite, white kaolin, Moroccan orange, and rose. I prefer to use white kaolin in small amounts for a silky soap, as too much will make soap slimy. Moroccan orange clay sometimes seems to be more tan, depending on the vendor, so if you are looking for orange, make sure that the packaging specifically says that it is orange.

You can use many herbs in your soapmaking. Be aware that some will turn brown after saponification.

Cocoa powder, paprika, coffee grounds, ground turmeric, ground ginger, tomato purée, carrot juice: There are so many things that you already have in your kitchen that can be used to make beautifully colored soap!

When To Add Color To Your Bar Soap

For some of you who always ask; when should I add color to my soap? Here is answer to that question. Certain natural colorants perform better when they are added to the lye water, added at trace, or prepared ahead of time as an oil infusion and added to the oils before the lye water is added. You can also add color after pouring your soap into the mold, to create special effects.

Adding Color to the Lye Water

This is the simplest method—you just stir the colorant directly into the lye water.

To add color at trace, remove a scoop of the soap when it has reached a light trace, place it in a glass bowl, and add your colorant. Use a whisk to make sure there are no lumps. Return it to your soap batch and mix well until the color is fully incorporated.

Adding Color as an Oil Infusion

You can take whatever oil is called for in a recipe and infuse it with a beautiful color. Just substitute some of the oil in your recipe with the infused oil to color your soap. If you choose lighter-colored oils for infusion, it will result in a purer color.

Adding Color After Pouring in a mold

I use this method to create layers and swirls. Transfer a scoop of soap to a bowl and blend in the colorant. Pour the large soap batch into your mold. Then add the colored soap by layering smoothly or swirling.

It’s important to note that some colorants added at trace or after pouring will change color as they cure and are exposed to air. Here are some examples:

How To Produce Cornstarch
Common Essentials Oils For Soapmaking

EarnBase is a subsidiary of AFRICHANT SOLUTIONS; an Entrepreneurial and Skill Acquisition Blog with exclusive information, training, interviews, and news on entrepreneurship. We understood that starting and growing a business in a developing country like ours is not an easy deal. That is why we have decided to provide you all the necessary … END_OF_DOCUMENT_TOKEN_TO_BE_REPLACED