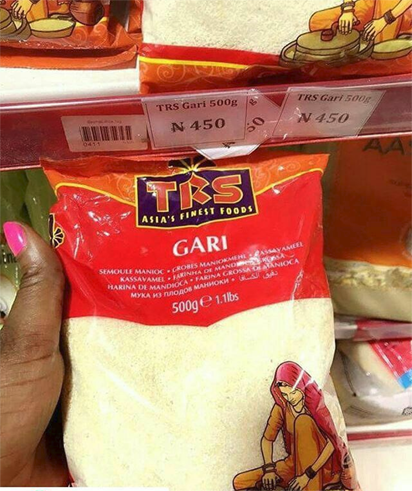 The National Agency for Food and Drugs Administration and Control, NAFDAC, Tuesday, said contrary to reports, it did not register the ‘Indian garri’ that was reportedly being sold in the Nigerian market.

The agency’s Director, Special Duties and Media, Abubakar Jimoh, said this in an interview with PREMIUM TIMES on Tuesday, noting that there had been false reports that the agency registered the brand.

Nigerians had expressed concerns over the weekend when it was reported that ‘Indian’-packaged garri was being sold in the country. The garri was packed in a 500g bag, which had the picture of a lady and an inscription, ‘TRS’, on it. It also had a price tag of N450, according to reports.

NAFDAC said it immediately commenced investigations into‎ the alleged importation of the “Indian garri”. The agency also cautioned Nigerians against consumption of the product.

Similarly, the Minister of Health, Isaac Adewole, spoke on the development in a statement on his verified twitter handle, noting that 26 packets of the product were seized for analysis by NAFDAC after regulatory officials visited the supermarket in Ikoyi on Monday.

While speaking with PREMIUM TIMES Tuesday evening, Mr. Jimoh said that preliminary investigations revealed that the product was produced in UK, shipped to Ghana and now being sold in Nigeria.

He, however, said that the agency did not register the product as being insinuated.

“We have collected samples of the product and sent them for screening,” he added.

Explaining further, Mr. Jimoh said NAFDAC couldn’t have registered the imported ‘Indian-garri’ because the agency understood the implication of such a decision on the local production market and the general Nigerian economy.

“We are not just safeguarding public health, we also ensure the growth of the Nigerian production industry and facilitate the federal government’s efforts at fixing the economy,” he noted.

The NAFDAC spokesperson said investigation is ongoing on the product and the agency would reveal the outcome of its findings once the investigations are concluded.

“The (Acting) Director-General of NAFDAC, Mrs. Yetunde Oni, would address the press once the result is out,” he said.

EarnBase is a subsidiary of AFRICHANT SOLUTIONS; an Entrepreneurial and Skill Acquisition Blog with exclusive information, training, interviews, and news on entrepreneurship. We understood that starting and growing a business in a developing country like ours is not an easy deal. That is why we have decided to provide you all the necessary … END_OF_DOCUMENT_TOKEN_TO_BE_REPLACED