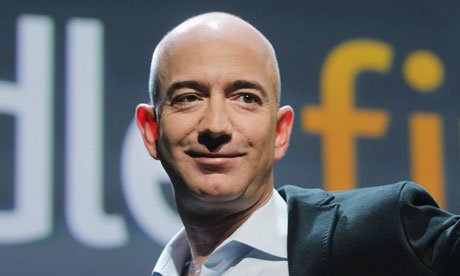 Jeff Bezso was born to Jacklyn Gise and Ted Jorgensen, he was adopted by Miguel Bezos, a Cuban immigrant, after his mother married him. As a child, he spent his summers laying pipes, vaccinating cattle and fixing windmills at his grandfather’s Texas ranch.

In search for his purpose, Jeffrey Bezos observed that the Internet usage was increasing by 2,300 percent a year. He saw an opportunity for a new sphere of business, and immediately began considering the possibilities. Bezos reviewed the top 20 mail order businesses, and asked himself which could be conducted more efficiently over the Internet than by traditional means. Books were the commodity for which no comprehensive mail order catalogue existed, because any such catalogue would be too big to mail — perfect for the Internet, which could share a vast database with a virtually limitless number of people. He flew to Los Angeles the very next day to attend the American Booksellers’ Convention and learn everything he could about the book business. He found that the major book wholesalers had already compiled electronic lists of their inventory. All that was needed was a single location on the Internet, where the book-buying public could search the available stock and place orders directly. Bezos’s employers weren’t prepared to proceed with such a venture, and Bezos knew the only way to seize the opportunity was to go into business for himself. It would mean sacrificing a secure position in New York, but he and his wife, Mackenzie, decided to make the leap.

When Jeff Bezos first started his virtual venture, he wanted to call the company Cadabra, as in abracadabra. He phoned his Seattle lawyer to try out the name, but the attorney misheard Bezos and replied, “Cadaver! Why would you want to call your company that?” Bezos quickly reconsidered and adopted the name Amazon.com, after the world’s second-largest river.

They set up shop in a two-bedroom house, with extension cords running to the garage. Jeff set up three Sun micro stations on tables he’d made out of doors from Home Depot for less than $60 each. When the test site was up and running, Jeff asked 300 friends and acquaintances to test it. The code worked seamlessly across different computer platforms. On July 16, 1995, Bezos opened his site to the world, and told his 300 beta testers to spread the word. In 30 days, with no press, Amazon had sold books in all 50 states and 45 foreign countries. By September, it had sales of $20,000 a week. Bezos and his team continued improving the site, introducing such unheard-of features as one-click shopping, customer reviews, and e-mail order verification. The business grew faster than Bezos or anyone else had ever imagined. When the company went public in 1997, skeptics wondered if an Internet-based start-up bookseller could maintain its position once traditional retail heavyweights like Barnes and Noble or Borders entered the Internet picture. Two years later, the market value of shares in Amazon was greater than that of its two biggest retail competitors combined, and Borders was striking a deal for Amazon to handle its Internet traffic. Jeff had told his original investors there was a 70 percent chance they would lose their entire investment, but his parents signed on for $300,000, a substantial portion of their life savings. “We weren’t betting on the Internet,” his mother has said. “We were betting on Jeff.” By the end of the decade, as six per cent owners of Amazon, they were billionaires. For several years, as much as a third of the shares in the company were held by members of the Bezos family. Bloomberg Billionaires Index listed Bezos as one of the wealthiest people in the world with an estimated net worth of $28 billion.

EarnBase is a subsidiary of AFRICHANT SOLUTIONS; an Entrepreneurial and Skill Acquisition Blog with exclusive information, training, interviews, and news on entrepreneurship. We understood that starting and growing a business in a developing country like ours is not an easy deal. That is why we have decided to provide you all the necessary … END_OF_DOCUMENT_TOKEN_TO_BE_REPLACED