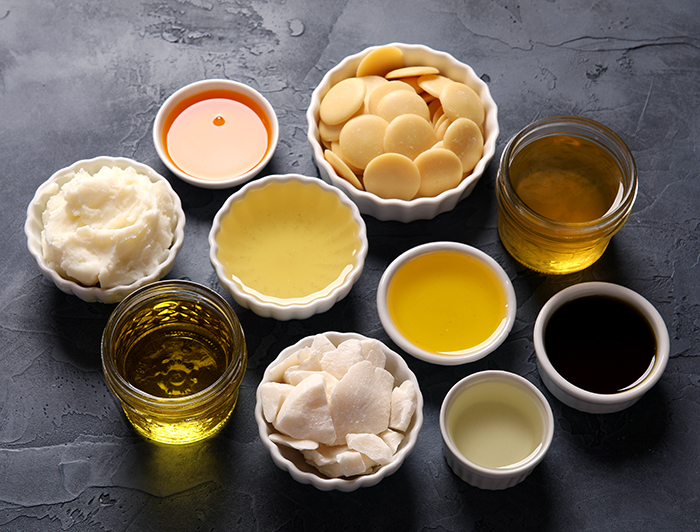 In today’s lesson; I will be reviewing the different types of fats and oils that are used to make soap. The four major kinds of fats and oils that we will use are tallow, lard, olive oil, and coconut oil. When they are combined, they create hard bars that can be either cleansing, bubbly, creamy, or conditioning, or some combination of all four. After deciding on one or all of these bases, you will then add other oils to ensure that your bar is exactly how you want it.

For example, if you want to make an olive oil soap, you will need to use a harder oil along with it or else you will end up with a bar of very soft soap. Meanwhile, if you use only coconut oil in your mixture, your skin may become dry. That is why I will help you understand how you can combine your oils to make wonderfully nourishing soap bars. Although, there are some oils you will not see listed below. Some of them were omitted because they are genetically modified or not ethically grown and processed. Others, like rice bran oil, can sometimes cause difficulties when used for soapmaking. Since I want you to have successful experiences, I’ve chosen oils that are easy to use and accessible.

In the following list, you will see that I give the SAP value for each oil. You can use the SAP value to determine how many ounces of lye are needed to convert 1 ounce of oil into soap, but rest assured that online lye calculators will also do the job for you. However, you need to understand that the SAP value I give you is for sodium hydroxide, not potassium hydroxide.

In order to determine how much lye to use in your bar soap production, multiply the SAP value of the oil you are using by its SAP value. For instance, if I am using 6 ounces of apricot kernel oil (SAP value: 0.139) in my recipe, I need to multiply 0.139 by 6 = 0.834. That means that I need 0.834 ounces of lye to saponify the oil. I make this calculation for each of the oils in my recipe. Remember, every oil is different and therefore needs a different amount of lye.

Once I’ve calculated the amount of lye needed, I still need to take away at least 5 percent of the lye so that I have oils leftover in my soap for nourishment. We call this superfatting, or lye discounting. The traditional lye discount used is 38 percent of the oil in the recipe. For example, a recipe with 34 ounces of oil will need 12.92 ounces of water (34 x 0.38 = 12.92). Let me explain better; you see, for you to make lye; you need to dissolve caustic soda in water. In other words; a dissolved Caustic Soda is called Lye. So, the SAP value is for you to know the amount of Caustic Soda to dissolve in water; while 38% of the oil or oils in the recipe are to know the amount of water to dissolve the Caustic Soda to produce the right concentration of Lye.

To make your work easier; I am going to give you one of my production resources for all these calculations www.SoapCalc.net

Apricot kernel oil is a golden cold-pressed carrier oil that has a light, nutty scent. It is high in oleic and linoleic acids, and vitamins A, E, and C, making it very moisturizing and conditioning to the skin. In soapmaking, it is important to keep apricot kernel oil to 10 percent or less or it will make soap too soft.

Argan oil is cold-pressed from the kernel of the Moroccan argan tree. It is a lightweight golden oil that that is high in antioxidants and vitamins A and E. It is a more expensive oil, but the properties make this a great soap for aging skin.

Avocado oil has a light yellow-green tint and is slightly thicker than many carrier oils. It is high in vitamins A, B, D, and E, as well as oleic and palmitoleic acids and, is considered a healing and moisturizing oil for dry and mature skin.

Babassu is a great substitute for coconut oil for those with coconut allergies. Its cleansing ability in soap is high, and it’s gentler than coconut oil. It is rich in vitamin E, phytosterols, and other antioxidants. Babassu also speeds soap to trace.

Beeswax is primarily used to harden soap bars when other oils that are desired may leave the soap softer than preferred. Also, it does not fully saponify, leaving properties in the soap to help naturally moisturize the skin and maintain that moisture for dry or itchy skin. It’s a great addition for those with sensitive skin.

Castor oil is a thick, yellow oil cold-pressed from beans from the castor bush. It is about 90 percent ricinoleic acid, a fatty acid that is traditionally used to treat skin rashes and infections. Combined with honey, castor oil gives an amazing lather, which is why I like to use it in shampoo bars. Castor oil also helps speed soap to trace.

Cocoa butter is made from the roasted seeds of the cacao tree. Like many other carrier oils and butters, it is high in vitamin E and other antioxidants. If it is pure, it has a cocoa scent and is hard, not creamy, when at room temperature. Cocoa butter makes a hard soap bar and is an excellent moisturizer. Like beeswax, it doesn’t fully saponify and has properties that help hold moisture in the skin.

Coconut oil is a great ingredient to create a hard, bubbly, cleansing soap bar. Solid at temperatures below 76Â°F, nondeodorized coconut oil has a strong coconut scent that only slightly remains in unscented soap. It can be drying to the skin if used in excess of 45 percent of the oils in the recipe, with the exception of salt soaps, due to high superfatting.

Grapeseed oil is a lightweight, greenish-yellow oil that is high in linoleic acid, omega-6 fatty acids, and antioxidants. As a mild astringent, it’s great for acne. Grapeseed oil creates a creamy lather and is highly conditioning to the skin and hair.

Hazelnut oil is a light, amber-colored oil with a nutty scent when unrefined. It is an all-around great oil for soapmaking because it creates a stable lather with medium-size bubbles. It is also cleansing and moisturizing. It slightly slows soap coming to trace and makes a softer soap unless used in low amounts. Hazelnut oil is high in oleic acid, vitamins, and minerals.

Hemp seed oil makes a silky-feeling bar that has a good lather and is highly conditioning. It is high in vitamins A and E but does not last as long as other oils in soap before oxidizing. Plan to use your soap within 6 months rather than storing it for a long period, or use a lower superfat percentage like 5 percent if you add hemp seed oil to your recipe.

Jojoba oil is actually a wax cold-pressed from the beans of the jojoba shrub. It is a very stable liquid, making it a great oil in long-term soaps and extracts. It creates a beautiful, strong lather and is conditioning to skin and hair. It does not fully saponify, creating a hydrating barrier to protect and moisturize. Jojoba can actually destroy lather when used in high amounts. I keep it below 15 percent of oils in recipes.

Lard is the rendered fat from a pig. It makes a wonderfully hard and long-lasting bar with a stable, creamy lather. It also helps soap come to trace faster. Always choose lard from a free-range, natural source. You can find it at a health food grocery store and render it yourself by cooking it down and straining.

Mango butter is similar to shea butter in hardness and texture. Like many natural oils, it is high in vitamins A and C as well as antioxidants. It’s great for those with dry skin, especially for use in facial soaps thanks to its high moisturizing ability. It helps create a hard bar with a stable creamy lather.

Neem has traditionally been used as an antibacterial and anti-inflammatory agent. It is very calming to the skin, making it a great ingredient in soap for those with acne or sensitive skin. It creates a stable, creamy lather in a hard, long-lasting bar.

Olive oil makes a very gentle soap for babies, elderly, and anyone with skin conditions requiring a gentle soap because it is so low in cleansing power. It is high in antioxidants like vitamin E and polyphenols. It makes a softer bar, but hardening and cleansing oils like coconut can be added to increase hardness.

Shea butter is a creamy, soft butter that gives a silky feeling to soap bars. It is high in vitamins A and E as well as fatty acids and minerals. It doesn’t fully saponify, making it a great ingredient to increase the nourishing properties of soap.

Tallow is the number one traditional ingredient for soapmaking. It makes a fabulous hard, bubbly, conditioning and cleansing bar of soap. Remove the superfat content and you have a great laundry bar. Choose grass-fed, organic sources in health food grocery stores or local farms.

How To Send And Receive Money With Your Phone Number
Natural Additives You Can Use In Soap Making; Bar or Liquid

EarnBase is a subsidiary of AFRICHANT SOLUTIONS; an Entrepreneurial and Skill Acquisition Blog with exclusive information, training, interviews, and news on entrepreneurship. We understood that starting and growing a business in a developing country like ours is not an easy deal. That is why we have decided to provide you all the necessary … END_OF_DOCUMENT_TOKEN_TO_BE_REPLACED