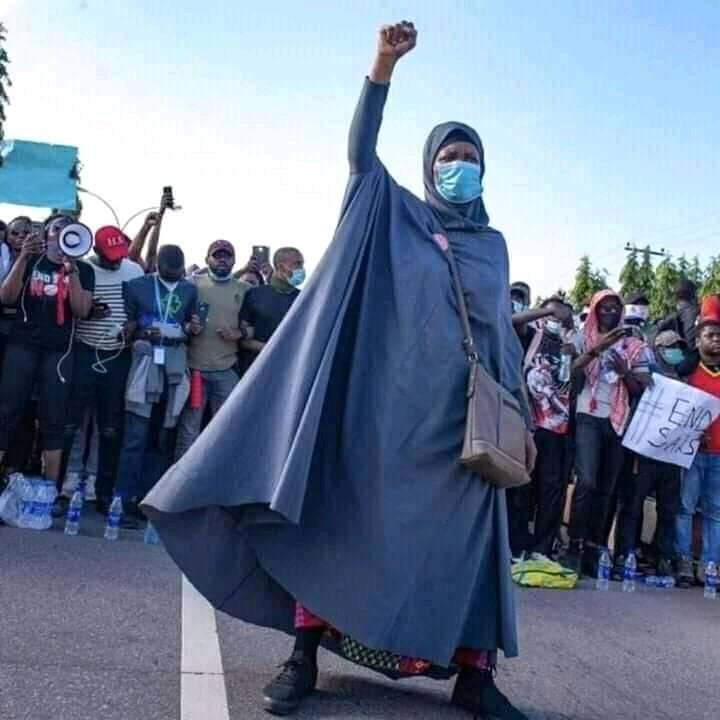 Who is Aisha Yesufu?

Aisha Yesufu is a Nigerian social and political activist who came to prominence for her role in speaking up for the abducted Chibok schoolgirls in 2014. Aisha Yesufu was the co-convener of the Bring Back Our Girl (BBOG) campaign that tirelessly held protests demanding for the rescue of the 276 schoolgirls kidnapped by terrorists in Chibok.

Aisha Yesufu was born and raised in Kano State. Her parents were poor, and as a result she grew up in a ghetto.

She said: “Where I grew up in Kano State can be compared to a ghetto, in fact, some people call it the Ajegunle of Kano, where you have a lot of drug users, street children, almajiris, and using drugs was very normal over there. If you were not into drugs in that area, you were seen as an odd person.”

She said: “By the time I was 11 years old, I did not have any female friends because all of them had been married off but I wanted to be educated and leave the ghetto.”

Aisha Yesufu with her husband, Aliu

Aisha Yesufu got married in 1996, at the age of 24 while she was still in the university. Aisha Yesufu and her husband Aliu celebrated their 20 years wedding anniversary in 2018.

Aisha Yesufu and her husband Aliu have two children together, an older son and a daughter. Aisha Yesufu’s youngest child was born on December 6, 2001, and she turned 18 in 2019.

Aisha Yesufu said she has always been known for speaking out against any form of injustice since from a young age. In many of her interviews, Aisha Yesufu described how she participated in a number of protests while in school.

Aisha Yesufu said: “For me, activism has been part of me all my life. I am somebody that stands up against injustice because I have a ‘big mouth.’”

Aisha Yesufu’s work on Bring Back Our Girls (BBOG)

Talking about her involvement in the Chibok girls’ campaign, Aisha Yesufu said she saw her speaking up for the kidnapped Chibok girls as an avenue to give back to her society.

Aisha Yesufu said: “I remember that I was at the gym with a friend who told me that later that day, she was going for a protest because of the abducted Chibok girls. I asked for the colour they were wearing and she said red. Since I did not have a red hijab, I decided to buy one that day. I called my husband to inform him of my decision and he supported me; that was how it started. When the Chibok girls’ incident happened, I was already set to give back to my society and I saw that as an avenue.”

Other interesting facts to know about Aisha Yesufu

Though Aisha Yesufu was born and raised in northern Nigeria, she is not from the north. Aisha Yesufu is actually from Edo State and so is her husband.

Aisha Yesufu has also revealed that she is not a big fan of house chores.